Watches that belonged to celebrities can have a dramatic outcome at world renowned auction houses like Christie’s, Antiquorum, Heritage Auctions and 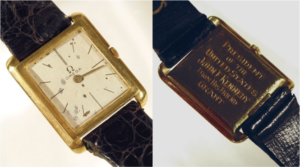 Guernsey’s. The blockbuster bidding can go well beyond initial auction estimates. A watch having once belonged to a famous person can add a strong value to the provenance. Below are the auction results of some famous watches owned by celebrities of the present and the past.

John F. Kennedy was given this gold Omega wristwatch in 1960. Kennedy wore it to his presidential inauguration in January of 1961. On December 16, 2005 the Omega Museum acquired it at auction for $350,000. It was auctioned by Guernsey’s in New York. This watch was part of The Robert White Collection. It is the world’s largest privately owned collection of JFK’s life. 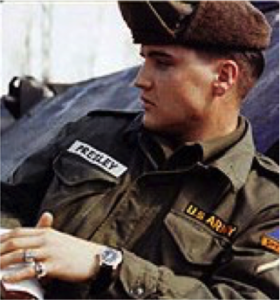 Elvis Presley once owned this 1960 black dialed Omega Constellation Calendar. It was auctioned by Antiquorum of New York on June 12, 2012 for the final hammer price of $52,500. The auction pre-sale estimate was a range of 10,000 to $20,000. The watch is an automatic chronometer movement in a steel case with rose gold plating. It is a piece of rock and roll history. The watch came from a private collection belonging to Charlie Hodge who was a close friend of Elvis Presley. Elvis gave the watch to Hodge while still in the army after Hodge expressed admiration for the watch.

Joe DiMaggio, the baseball hall of famer, once owned this Bulova Accutron. It is a water resistant, stainless steel case with an electronic movement. It was sold on April 10, 2013 at Antiquorum. It was accompanied by a certificate signed by DiMaggio’s granddaughters verifying the provenance. The watch was part of the auction “Important Modern & Vintage Timepieces”. The initial pre-sale estimate was $4000. It sold for $20,625. The watch appeared to be unworn. 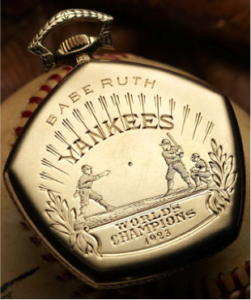 Babe Ruth’s world-series Gruen Pocket Watch. Before the major league baseball players were awarded world-series rings for winning the world-series, the teams would celebrate their win by giving their players a commemorative watch. In 1923, the New York Yankees beat the New York Giants in 6 games to win the first world-series. The most treasured of these watches is the one owned by the New York Yankee Babe Ruth. His watch is a Gruen Verithin 1923 world-series championship pocket watch made of 14 carat gold. It was auctioned by Heritage Auctions on February 22, 2014. The final hammer price was $717,000. 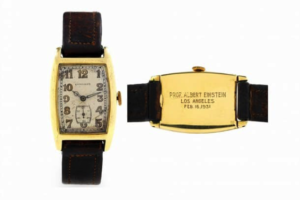 Albert Einstein once owned a Longines wristwatch. It is a tonneau-shaped 14 carat gold watch. On October 16, 2008 Antiquorum auctioned the 1930 Longines watch owned by the famous scientist. The backside shows an etching featuring Einstein’s name, Los Angeles and the date of 1931. The auction estimate was $35,000. The final hammer price went for $596,000. This is a record for the highest selling Longines watch.

Your “Watch Repair Basics” course will consist of 6 video modules along with a series of emails which will have content teaching you various watch repair topics. There will be links to the videos from the emails. Most of the emails contain a video link. The email content along with the videos is what you will receive for this course.

I want to thank you for being a student and horology enthusiast. It really does mean a lot to me. As a horology instructor, connecting with my students is my number 1 priority – so feel free to email me back at [email protected] or through my website if you ever need to get in touch.

There are some free smart phone screen live wallpapers and a phone apps for the horology enthusiast. Most of these versions are free. There are paid versions that provide more features. I am not endorsing any of these apps or wallpapers and I have not tested them. They appear to be from a reliable source as they are directly from the Google Play Store and iTunes websites. I am only providing useful information that may be of interest to you. The iPhone app below does not have a free version. The links below will take you to the apps and live wallpapers. Some offer a video that demonstrate the app in action. You can read about them and decide if it is for you.

Clicking on the pictures below which will take you to the Google Play Store to view these applications. 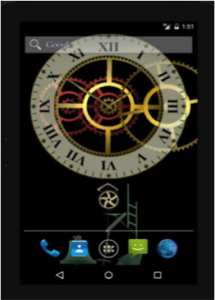 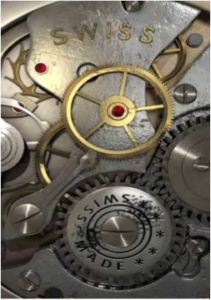 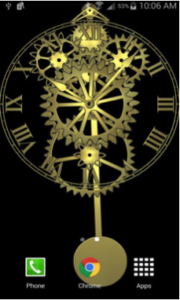 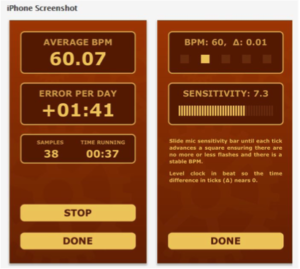 The app above uses the phone microphone to capture the audible ticks of the clocks escapement and pendulum. It determines the beats per minute and the rate of error in seconds per day fast or slow. This one is not free. It will cost you $9.99 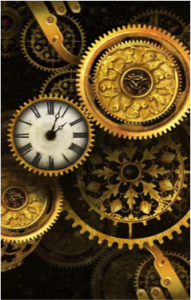 This one is very elegant. It has very a fluid movement. The link to this app will provide a demonstration video show the operation of this phone app. 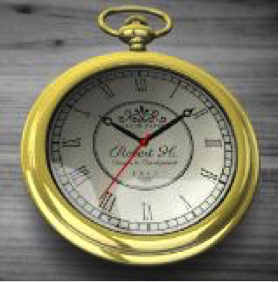 The above pocket watch app is a 3D application which moves in a fluid fashion on the surface   of your phone. Clicking on the link will take you to the application site that has a video showing   the application in action.

P.S. If you know of someone who may be interested in clock or watch repair, please send them the following link: www.ticktockpro.com/free.htm (Copy and paste the link to an email)

The history of the words clock and watch Part 2 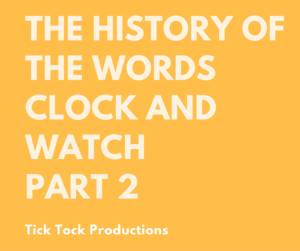 According to the Etymology Dictionary, it is believed that the word “clocca” was in turn derived from the Old Irish and Celtic word “clocc.”

It is possible that the Irish missionaries spread the use of the word “clocc“. The English language then adopted the word from the Middle Dutch “clocke,” modifying it to “clock,” for the first time meaning only the timepiece and not including a bell in its definition.

The term “bell” in the English language had origins in Proto-German. The word was used to replace the Old English word “dægmæl,” which meant “day measure” or “day mark”. The marking of the day. A similar word to this in the Latin language was “horologium,” of which the Greek term “hora” added with the ending “logy.” This ending in Greek is used to refer to a science, study or theory. This is where the modern English term “horology” comes from. Horology was first documented as an English word in 1819.

Clock enthusiasts know that horology is the science of measuring time.

The English language has a few other references of the word “clock” that have interesting origins.

According to the Etymology Dictionary, the term “o’clock” was used to shorten the phrase “of the clock.”

The term “of the clock” had been used before this point to refer to time on a clock face.

Originating in 1904, the term “o’clock” was used by pilots and firearm shooters to reference directions. People still use this reference today. For example, if someone sees an enemy, they may say to a friend “Enemy at five o’clock,” referencing the position of the person from their location.

In the Etymology Dictionary is the origin of the term “clockwork.” Originated from the English language, this word emerged in the 1660s, meaning “mechanism of a clock.” The old French term “cloque” that had a part in the evolution of the word “clock” mostly indicated a bell sound. From the word “cloque,” the similar English word “cloak” emerged, created to describe the bell shape of a cloak garment. Another commonly term, “clockwise,” was born in 1879, used to describe the direction in which the hands traveled around the face of a clock. The term “clock” was paired with the word “wise,” meaning “the way of proceeding.” When combined, the meaning of “clockwise” is “the way the clock proceeds.”

For more stories and info click here for clock or watch repair.

September 1, 2016 TickTock Learn clock or watch repair Comments Off on The history of the words clock and watch Part 2

The history of the words clock and watch Part 1

The word “clock” was likely derived from the Middle Dutch word “clocke.” An etymology and word origin list from Rice University states that the word “clocke” was used to describe the noise making bell in the church tower and is defined as a bell clock. 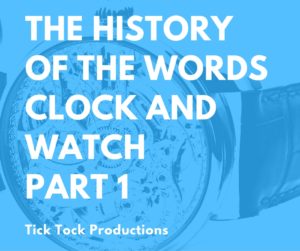 From the description in the definition, the bell in the Dutch church towers made a lower “bong” type of sound instead of the high pitched clang sound that is most commonly associated with church tower bells. The word “clocke” was formulated before clocks with faces emerged. The description states that later a “newfangled timekeeper” with a rounded face and hands was added to the church tower.

“Clocke” was the original word, but when the English imported the timepieces, they shortened the name to “clock.” Differences in the English and Dutch language affecting this issue were that the Dutch language had one word that meant both “bell” and “clock,” while the English language developed two separate words. One English word meant “clock” and one meant “bell,” to not cause confusion between the two and provide a distinction between a ringing bell and a clock with a face.

In the Online Etymology Dictionary, the word “clock” originated in the late 14th century. This time line matches with the above reference because clocks in this era were not the typical face clocks that displayed the time, featuring a face and hands.

The Anderson Institute reports that during the 14th century, the clocks used then are now referred to as turret clocks. Turret clocks were devices powered by a verge escapement, weights and chains. The bell clock was then placed in the bell tower to chime the passing hours. The chains had to be wound and would often lose balance, resulting in the hours being tolled late or early; these clocks were not very accurate.

One of the oldest surviving turret clocks exists today in England and dates to 1386. Located in the Salisbury Cathedral, this clock only tolls the hours. See the picture of the clock movement to the right. In clock history, these beginning devices were the predecessor of larger wall clocks with faces that had similar functions and structure.

The word “clocke” also had influence from words in other foreign languages.

That concludes are part 1 – part 2 will be coming out next week.

Thanks for taking the time to read our articles and we hope you enjoy our information  Learning clock or watch repair.

August 18, 2016 TickTock Learn clock or watch repair, Watch Repair Comments Off on The history of the words clock and watch Part 1