The history of the words clock and watch Part 3

Many terms related to time. Clocks and watches have an extensive history, some dating back to ancient Egyptian water clocks. 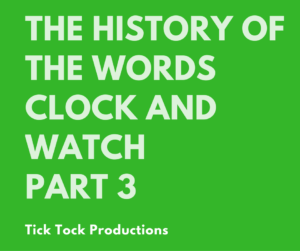 As time continues, more words with “clock” or “watch” in them will emerge, especially as technology continues to advance.

100 years ago, the term “clock radio” or “cell phone clock” would not appear in any dictionary.

The wristwatch concept goes back to the production of the very early watches in the 16th century. Elizabeth I of England received a wristwatch from Robert Dudley in 1571, described as an arm watch. Initially, wrist watches were almost exclusively worn by women. Men used pocket watches up until the early 20th century.

The Garstin Company of London patented a “Watch Wristlet” design in 1893, but they were probably producing similar designs from the 1880s.

Wristwatches were first worn by the military towards the end of the 19th century, when the importance of synchronizing maneuvers during combat. The British Army began using wristwatches during colonial military campaigns in the 1880s. The importance of coordinating troop movements and synchronizing attacks against the highly mobile insurgents became paramount, and the use of wristwatches subsequently became widespread among the officers. The company Mappin & Webb began production of their successful “campaign watch” for soldiers during the campaign at the Sudan in 1898 and increased production for the wars a few years later.

Do you want to learn more about clock repair? Enroll in our free online clock course here.

September 15, 2016 TickTock Uncategorized Comments Off on The history of the words clock and watch Part 3